Complete deliveries and service in the field of plastics industry

We focus on deliveries of top materials and products for the plastics industry. We have long-standing experience and contacts not only on the Czech plastics market. 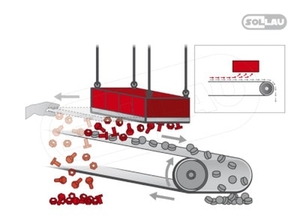 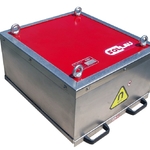 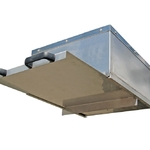 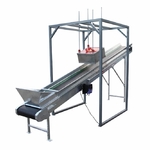 The manually cleanable magnetic plate is used for the removal of unwanted iron from heavy burdens of material being conveyed on fast moving belts. The magnetic plate with manual cleaning is suitable especially for materials with a low content of ferromagnetic particles (i. e., when the separator does not need be cleaned more than once per workshift). In case of higher content of magnetic particles, it is recommended to use overband magnets with automatic cleaning (DND-AC).

Design of the separator DND-MC

A magnetic block equipped with ferrite or neodymium magnets is placed above a conveyor belt. The strong magnetic field attracts the ferrous contaminants from the conveyed material and then holds them to the separator face. The captured metal is removed manually according to the level of metal contamination.

Optionally this separator can be equipped with a cleaning device (a stripper tray) for simplified cleaning. At the bottom of the cleaning device there are longitudinal laths preventing the trapped Fe particles from jumping onto the magnetic core during the separator cleaning. At the same time, the laths also arrange for a more even distribution of the ferromagnetic particles on the stripper tray.

The DND-MC magnetic plate can be manufactured in dimensions according to your needs.

Magnetic block with a rail construction 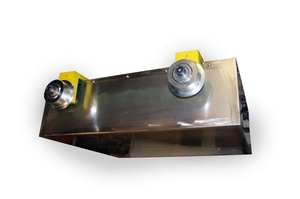 A special variant of the DND-MC magnetic separator is a version equipped with a simple rail construction. When cleaning the magnetic plate, it can be very easily pushed aside, even if the belt conveyor is in operation.

Our tip: simultaneous application of the suspended magnet DND-MC with the magnetic pulley MV

In order to achieve the highest possible degree of separation (especially in case of a higher layer of material transported on the conveyor belt) it is recommended that the overband magnet DND (separating tramp metal from the top layer) is combined with the magnetic pulley MV (that is able to attract ferromagnetic particles from the bottom material layer).

You can refuse consent at any time.